UPDATE - Apparently closing the VM, unplugging the programmer, unselecting the programmer from the USB device menu, or pausing the VM after the programmer has been loaded by the VM makes Windows 7 bluescreen. So far, I have not found a way around this, as such the TOP2004 is effectively useless again. At least it's able to program chips and stuff, but once loaded, the VM has to stay open and has to be running. Pretty lame. I'll try to find a fix and update (BTW I'm using the latest VirtualBox as of this writing). Any ideas? 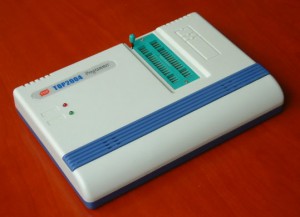 I love electronics. Building basic circuits, programming microcontrollers, making malicious self-replicating robots programmed to hate humans, and even so much as wiring up complete motherboards with old processors and LCDs. I had to find a USB flash/eeprom programmer that fit my hardcore lifestyle. On ebay a few years back, I bought the TOP2004. This wondrous piece of Chinese equipment is cheap, cheap, and USB. I needed USB because in the process of making my own flash programmer a while back, I destroyed half the pins on my parallel port. The programmer worked great, but only worked for one chip. I needed something a bit more versatile. The top2004 isn't a bad piece of equipment. The manual was translated poorly from Chinese, as is the software that comes with it.

Well, for the longest time, I was a Windows XP guy. Nowadays it's all about Windows 7. Don't get me wrong, I'm Slackware through and through, but I need my gaming. So I installed 64-bit Windows and love it, but my programmer no longer works.

Obviously running it in a VM is less than ideal, but it's better than dropping $200 on a real programmer that might actually have 64-bit support. The great part about this version (2.52) of the TopWin software is that it supports the atmega168, which is almost exactly the same as the atmega328...meaning arduino fans new and old can use it. I'm not an arduino guy and use the chip just by itself with avr-gcc, but you can do whatever the hell you want once you get the TOP programmer working.